Massaman Curry is a southern Thai dish influenced by Malay and Indian cuisine. The rich taste of Massaman comes from the local flavors. Thai red curry paste combines with exotic spices: cardamom, cinnamon, star anise and bay leaves – all of which were brought to central Thailand by Persian merchants in the 17th century. the curry’s fragrant aroma and beguiling flavour were extolled in a poem by King Rama ii, dedicated to his wife:

“Massaman, a curry made by my beloved, is fragrant of cumin and strong spices. any man who has swallowed the curry is bound to long for her.”

Massaman Curry is my favorite among all Thai curries. In Thailand, It is the only dish that has potatoes; you aren’t likely to find many other Thai dishes with potatoes. Traditionally rich and creamy massaman curry is served with steamed Thai jasmine rice. But I like to eat this curry with pita bread or naan bread.

In this online class you will learn:

This recipe can be adapted to be cooked:

They can also be cooked spicy or not depending on your own taste.

Alternative solutions for any food allergies!

To view the ingredients and tools needed, click to zoom the preview below or download the list with all our courses checklist on a printable PDF file.

Download our complete brochure to get insight info about all the courses, the recipes, tips and tricks about ingredients and more.

Not sure what this tour is? look at the full program here: Online Thai Cooking Class

Choose your favorite date from the calendar below…

Fill the form with your contact info and “Book Now”…

Booking Confirmed!
We’ll contact you a soon of possible.

For more info please contact us before make reservation

For more details check our Terms and Conditions page. 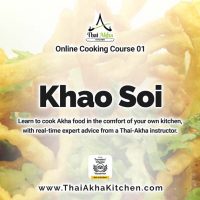 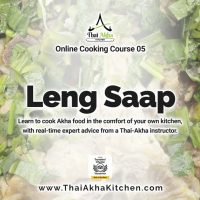 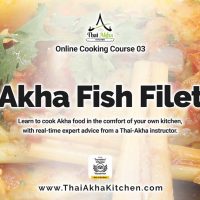 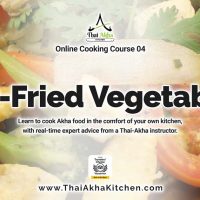 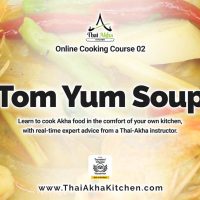 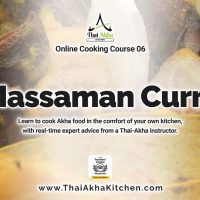